Welcome to our blog!


Welcome to our blog! I'm new at this but thought it would be fun to in later years to recall the happenings of our busy lives! 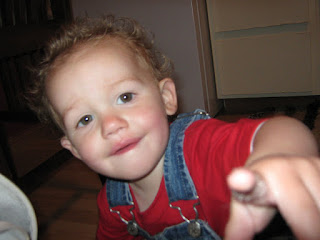 Hunter is almost 20 months and is (finally!) starting to talk. A few weeks ago he started saying "mommy" and "puppy". His new word is more, which comes out like "mo". When you tell him to say please he'll start nodding his head until he gets it. : ) He calls cars beep beeps and gos. He's trying really hard to say his name too! 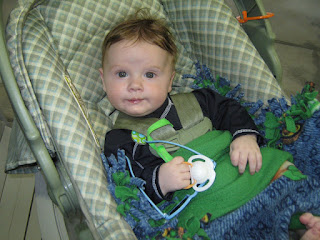 Jimmy is 5 months and 1 week old. Still hates being on his tummy, though he is getting better about it. Perry and I placed bets last night as to when we think he'll start crawling. He bet the middle of Septemeber. I'm thinking its not going to be until October. We're starting him on rice cereal. He's been doing really well too! He lerches for the spoon and then sucks on it. Jimmy is starting to be a happy baby - unlike when he was born. He still has is crying fits though.

Last night was the 2nd night the boys shared a room. It went a lot better than the first night. The first night, Jimmy wasn't swaddled so he'd wake up and take the binkie out of his mouth and get mad. Of course that woke Hunter up. And then Hunter didn't want to go back to bed without Perry saying everything was okay...little stinker. Last night we left their door open to get more cool air in their room and just put the gate up in the hall so the only place Hunter could go was our room. And at 3:00 he was in our room dancing to the radio. I was so out of it that I thought my phone was ringing, but I couldn't understand why it was playing rap music! After I actually woke up and realized what was gong on, he was promptly sent off to bed again. : )

Since I don't have a little girl, I have to play with Jimmer's hair. Its getting SO long! The other day I gave both my boys mohawks. Hunters hairs is so curly that it would curl at the tips, so I had to get out my hairspray and straightener to get it the way I wanted. Jim's hair was almost to long to stand up! He also got hairsprayed. I then took them to Sears to see their daddy {and to shop for a new video camera : ( } While we were there a little old lady asked me if they were twins. When I said no she responded with "well of course not she is such an adorable little girl!" [see Jimmy with mohawk and blue outfit]