2015 Soccer Season Off To A Good Start

It started out as a rough morning for us. Everyone was extra tired from yesterday, and I was wanting to sleep for an extra half an hour. Charlotte woke up around 7 and came running to my room announcing, in a not-so-quiet voice, "I'm wake, mommy! I wake mom! I wake up mommy!" Oh good job, Charlotte...And then she turned on the lights. UGH. I'm so not a morning person. I then found Hunter trying to sneak a bunch of snacks out of the pantry, followed by another pillow fort making the downstairs a disaster. Not what I wanted to wake up to...

We made it to the soccer field with a couple minutes to spare, after hiking clear across the rain soak grass in my heel boots. What was I thinking? 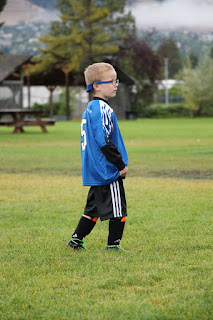 JP got his jersey right before the game. He's number 5 and thinks it's super cool, since he's 5. (Hunter 6 in baseball and was 6 years old too..) 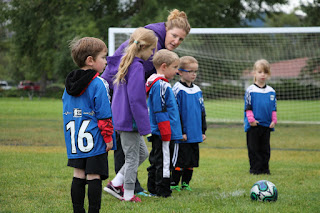 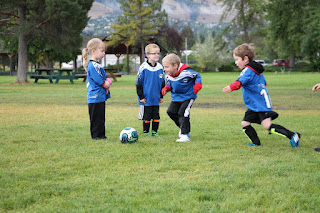 Not to be confused, that's about the only time he kicked the ball...There was a little bit of standing around on his part. 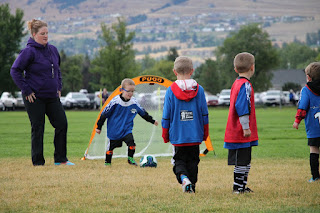 Occasionally, he would throw it in, or do a corner kick? whatever that is... 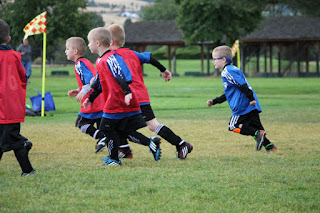 But more likely you could him chasing after everyone and running to where the ball was before it was kicked away. He did great regardless. Other than practice the other day, this was really his first time playing soccer. 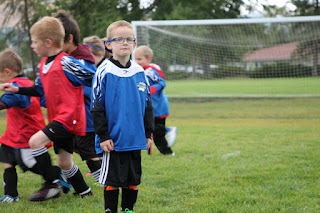 At the very end of the 2nd quarter, he just stopped playing. He instead stood in the center of the field staring at me...like this. 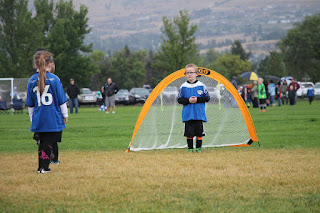 There was a little confusion after the half when they switched nets. JP was told to go near the net so he could be ready to kick it in. He instead opted to be the goalie against his team. Ooops! 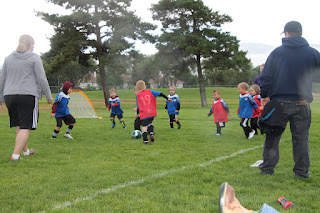 He took a break on the sidelines for a little while, and then came in without his coach's "okay" so they played 5 on 4 for a while before she noticed.

At the beginning of the 2nd half, it started to lightly rain. By the end of the game, everyone was pretty wet and ready to go. JP said he had a lot of fun and is excited for his next game. I just hope the weather is better!
at September 05, 2015 No comments:

I was feeling really, really bad this spring when I signed Hunter up for baseball because we had agreed that JP could play soccer. Then I missed the sign-up deadline for soccer and JP was heartbroken, especially when he found out his friend was in soccer... After talking with his pre-school teacher a few weeks ago, she referred me to a recreational-based soccer club, who has a season in the fall. I put off looking into it a little too long and missed the deadline by a week. I really didn't want to have to break the news to him again, so I emailed and asked if I could still sign him up after the deadline. I'm glad I asked too because they were able to find him a spot. Phew!

We hustled out of the house this afternoon and were *only* a couple minutes late - got to love 5:00 traffic...But getting out of the house with 3 kids is a challenge alone! JP had a little meltdown when we arrived because Hunter brought JP's soccer ball to play with while practice was going, but JP insisted that he needed it for practice. There were plenty of extra...The things they fight over... 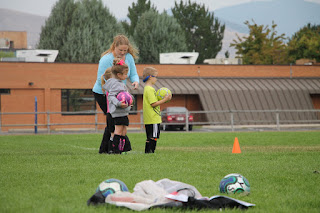 They did a couple drills at practice, like throwing the ball in-bounds and dribbling. 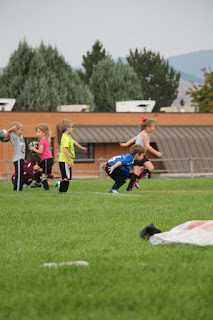 After about half an hour, they played a little game to practice chasing the ball and getting it to *their* net. 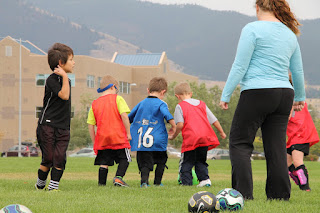 JP did great! He was always on task and it was so much fun to watch all the kids! Coach - "What do you do when someone takes the ball from you?" Little girl - "Start crying." Ha ha ha... 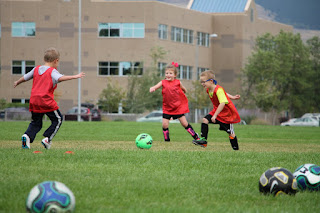 Since the kids started school, Missoula doesn't seem so big. We're slowly but surely getting to know people. This little girl with JP, above, went to the 2-day pre-school with him. He says he doesn't remember her though. 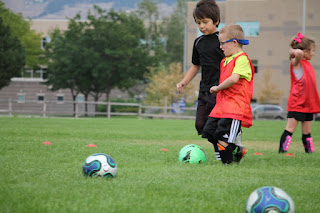 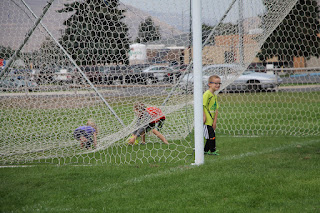 After practice Perry took the kids to the soccer net so he could shoot some goals while I got clued in to where all the games were and what to wear...JP looks so small in the net!
at September 02, 2015 No comments:

Email ThisBlogThis!Share to TwitterShare to FacebookShare to Pinterest
Labels: Soccer

Our First Week of School So Far

We're officially a week into the school year and so far it's going *fairly* smoothly. We're still trying to get back into the swing of the things but we're getting there! I am very anxious for Perry to get the lockers done that he's been working on for the last couple weekends. So far it looks great! I love when I can draw and describe something I want, and he can build it for me. Like the gate at the top of our stairs - the best idea I've had in a long time! More on the lockers, next week?, when they're done!

JP has been enjoying school so far. He knew two kids in his class from the start, so I think that helped him adjust a little - not everything was new! One of the kids he knows is my friend's daughter, and she is so stinkin' cute! (I think JP can agree too, though he won't admit it to his mom...) They don't sit at the same table, but he was sure to tell me the arrangement. "I sit at the orange table and she sits at the red table behind me. I can't see her, but I know she can see my back!" *said with a lot of emotion and googly eyes. He also asked if he could take some candy to school to give to her... Ahhh!

But not everything has been so cute with him so far. Last week he went to school in the morning and a mid-day bus brought him home around 12:30p. That length was perfect for him. It was adorable to watch him get off the bus the first day - he sat by the window and waved at me as the bus approached the stop. SO CUTE! This week though, the bus ride home has been a little hard him. On Monday he and Hunter got into a spitting fight because JP didn't want Hunter to sit with him...so Hunter spit at him and then JP spit back... They both got in trouble from the bus driver and since that made poor JP mad, he ran across the road after getting off the bus, and then got in trouble again for not waiting for the driver to signal them across. That plus mom not letting him eat his snack in the living room caused a HUGE meltdown after school. Mom is so mean...

On Tuesday he waited for the driver to signal him across the road, but he was looking on the verge of tears when he got to me. Apparently "some kids older than Hunter" were pinching him on the bus. It didn't hurt, but he didn't like it. They also tried to take his backpack and that really hurt his feelings. Perry asked Hunter to sit with him on the bus, or near him, so if it happens again, Hunter can help JP out in the situation, or more likely, so we can get more information on what is going on. I expected problems on the bus, but more so between Hunter and JP.

Hunter and I are having a couple struggles this year too. He has homework this year, and he hates it. Each night he is supposed to read for 15-20 minutes and complete his math homework that should only take about 5 minutes. He's pretty good at math, but absolutely hates reading. I think he just needs more confidence. He hates sounding out words and when he reads he just mumbles and it so frustrating because I can hardly hear what word he's saying... So that's been fun. Yesterday brought a form home explaining how each child needs a homework helper. The person he selects will be available to help the him with his math homework each time homework is sent home. The person he selected? Not mom or dad. Neighbor Dan. And when we explained that he might not be home all the time to help him, he selected neighbor Darrell, who he hardly talks to. Honestly, Dan would be a good choice for him because Hunter adores him. But I really don't think it would work out. Maybe every so often we could work something out with him though... Hunter doesn't know it yet, but I signed up to be his helper. Kind of an obvious choice. Maybe in a few years he can be Charlotte's helper?

We're also struggling to wake up in the morning. And by we, I actually mean ME. I hate getting up before 7am. I am just not a morning person! I'm really surprised we were never late for the bus last year. A couple close calls but we made it. Hopefully we can keep the streak going this year! Tomorrow should be fun waking JP up since he has soccer practice tonight...
at September 02, 2015 No comments: